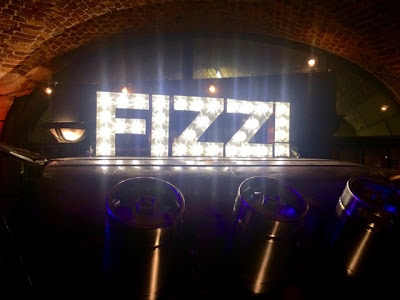 Very jazzy prosecco and bellini van.
Taste of London Winter promises to be ‘a winter feast for the senses celebrating the thriving, diverse and truly exciting London restaurant scene‘ and that it is! With a host of top London restaurants setting up temporary kitchens at Tobacco Dock (spectacular venue) it’s an excellent opportunity to try food from a selection of the capital’s best restaurants all in one go! It’s not all about the posh nosh and taster plates though, Taste doubles up as a food fair with all sorts of independent producers selling their wares from cider, wine and gin producers to butchers with speciality sausages, cheese and fudge makers and artisan bakers to delicatessens selling authentic Italian ingredients. Of course there’s also ample opportunity to buy a spiced cider or prosecco to sip on the way round. 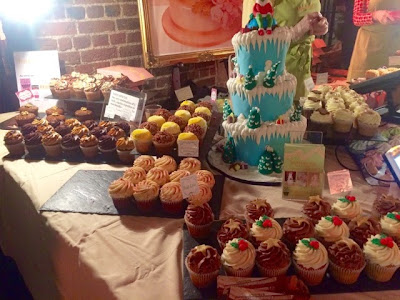 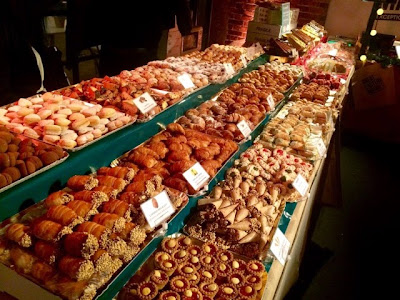 The first restaurant dish I chose to sample was from Hixter, well known for it’s hearty, rustic no-nonsense grub. I went for the Yorkshire pudding with chicken livers while my sister had the sirloin steak slipper. I’d expected my choice to come up as some sort of filled Yorkshire type thing but the whipped chicken livers actually served as a dip whilst I tore off chunks of the crispy Yorkshire pudding to mop it up with. The chicken liver mousse packed some serious flavour, my only complaint being that you’d need about twice as much to match the amount of Yorkshire you had for dipping. 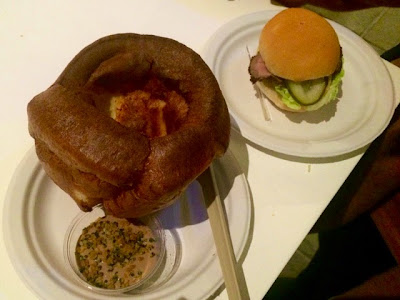 Hixter:
Yorkshire Pudding with Whipped Chicken Livers ;
Glenarm Estate Sirloin Steak Slipper with Scrumpy Fried Onions
This was followed by bit of browsing the produce stalls where I purchased a few goodies including a packet of chilli flavoured spaghetti and some cheese from The French Comté, residents of Borough market. I first discovered this stuff when I bought some on a whim from The Real Food Market and fell in love with it. It’s a delicious hard cows milk cheese with a really fruity flavour, perfect for your Christmas cheeseboard. Mine of course didn’t even survive the weekend let alone until Christmas! 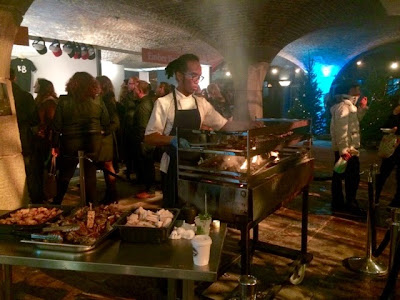 Whilst exploring we couldn’t help but be drawn by the smoke and smells coming from the barbecues at Kurobuta and Ember Yard. I can’t resist a barbecue and the stuff being cooked over these hot coals was some seriously high end grub. There were two dishes we both really wanted to try from Ember Yard so we got one of each and shared. It was a little bit of a wait for our grilled octopus but luckily we had the truffle mac and cheese to chow down on in the meantime. Silky smooth and creamy with a crunchy crumble on top this ticked all the right boxes. The octopus was probably my favourite dish of the evening, the smoky chargrilled taste alongside the spicy chorizo, all expertly cooked was seriously good. 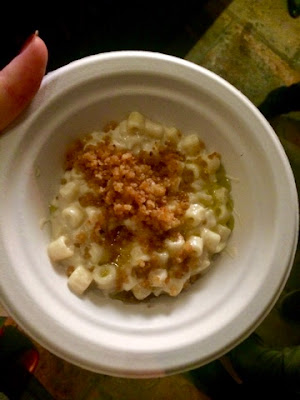 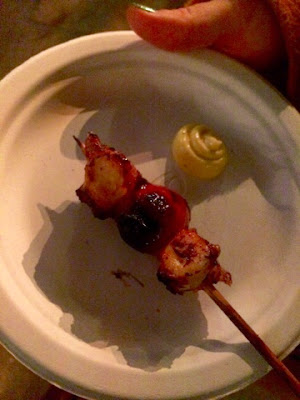 Ember Yard:
Truffled Mac and Cheese ; Charcoal Grilled Octopus Pinchos with Saffron Aioli
After sampling lots of bits of different cheese and meats and a few spiced ciders later on I had my last dish at Brindisa. After a very British beginning to the evening you can see I obviously went off on a bit of a Spanish tapas themed tangent. I ordered the ‘Bomba’, a meat and potato croquette, which was much larger than I was expecting. Lovely and crispy on the outside, this broke apart to reveal a delicious moist centre and the sauces that came with it were amazing, the garlicky alioli in particular. I think this has to come a very close second after the octopus. 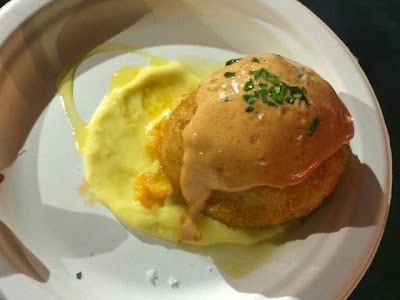 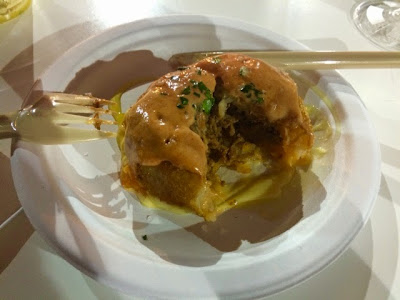 Brindisa Tapas Kitchens:
Bomba – Potato & Meat Croqueta with Alioli and Brava Sauce
There are a couple of other producers I stumbled across that I failed to get pictures of but are definitely worth a mention. Firstly were Heck Sausages. I sampled some of the smoky chorizo style sausage as well as the plump pork and apple. Heck is a family run business that produces damn good sausages and what I really love is that if you look at the ingredients, its a nice short list of normal stuff that you’d expect to be in your sausage with much of the range boasting 97% pork shoulder and this really shows in the flavour. Tastiest sausages I’ve had in a long time.
The other standout producer for me was Cranes. The brainchild of identical twins Dan and Ben, Cranes is an alcoholic drink made from fermented cranberries, in the same way that you’d ferment apples for cider. I tried a sample at their main stall and was really liked the flavour, I purchased myself a cup to sip on whilst I continued to peruse the rest of the goodies on offer. As well as being incredibly tasty Cranes is also half the calories of white wine, bonus!

The avid followers among you may remember that I visited this event last year and found a few flaws in the organisation and logistics of it. Most specifically the payment system where you have to purchase the festivals fake currency ‘crowns’ in order to pay for dishes. This was a bit of an unnecessarily complicated process which involved having to queue to buy booklets of vouchers, having odd amounts left over and then finding not all stalls even accepted them. Thankfully this year Taste resolved the problem brilliantly streamlining the whole thing into a simple card which doubles up as your ticket, you can top it up beforehand or at the event, simply touch it to a reader to pay on the stalls and get any remaining balance refunded afterwards. In stark contrast to the previous year I thought this was a brilliant system as I kept the card in my pocket and didn’t have to dig around in my handbag for my purse every time I wanted to pay for anything. Unfortunately there are still some stalls which only take proper money but I found the whole process a help as opposed to the hindrance it was last year.

Taste of London Winter is a great event hosted at a truly magical venue. It was a great way to kick start the Christmas season and a great place to get some truly unique gifts for all your foodie friends and family. Taste run various events throughout the year including Taste of London in Regent’s Park in the summer.