Skip to content
Welcome, at last, to my second edition of the (not very official) Dean Street Pizza Showdown. After a delightful evening in the recently established Pizza Pilgrims last month, last week I paid a visit to the second restaurant on my list: Soho Joe. I’ve been a regular at Soho Joe for a number of years now, but usually on my way to work, the morning after a night out, for a hangover curing, bargain £1.50 sausage baguette. You just can’t beat it.
Unlike Pizza Pilgrims, Soho Joe isn’t purely a pizza joint. They do great bargain breakfasts, have a varied lunch menu and have daily lunchtime deals on burgers and pizzas. The evening restaurant menu, although it does offer a fair bit of variety, is predominantly pizzas.
Whilst the point of being there was of course the pizza, I also wanted to sample a few of the other things on the menu, just for a bit of variety. And so we began with an antipasti platter of cured meats, mozzarella and marinated and grilled vegetables with a side of Rosemary and olive oil garlic bread. 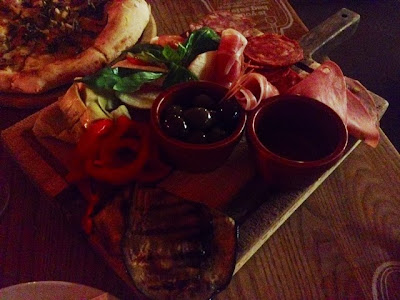 The antipasti was really lovely, I do like that sort of thing… Just a few tasty bits to nibble on before the main event. Although to be honest I’d be just as happy to sit and nibble on this stuff all evening! My only criticism was the uneven distribution of some it the tasty treats. For example there was only one slice of mortadella between the two of us, which sparked a bit if negotiation as to who got to eat what, being a huge veggie fan, I bagged the aubergine. The garlic bread was near perfect, however just a tiny bit too heavy on the rosemary, I ended up brushing a lot off. We were a little rushed to finish our starter as we weren’t quite done and the waitress came over twice to ask if she could clear the plates so our pizzas could come out. I’m fairly certain we weren’t eating unusually slowly or anything.
For the main event I went for Joe’s special. A thin and crispy base (not dissimilar to the style of Pizza Pilgrims) with roasted peppers, grilled aubergine, artichoke, mozzarella, a tomato and basil sauce and Italian Parma ham. The pizzas are cooked fresh to order in their huge pizza oven, it didn’t have the almost smoky woody flavour you sometimes find in a fresh baked pizza, however the freshness really shone through in the flavours. 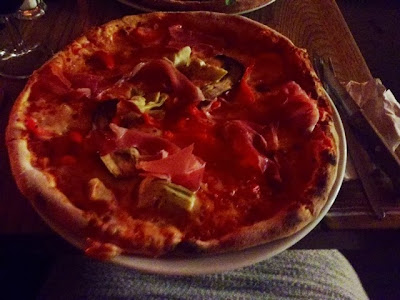 As you may have noticed from the pictures, the lighting in Soho Joe‘s, in the evening, is extremely dim. If it wasn’t such a busy, noisy and bustling restaurant the mood would be more than a little romantic. If you’re looking for a relaxing quiet atmosphere, this is perhaps not the best option. Whilst you are escorted to your table by the hostess, you have to go up to the counter to order and go to find the complimentary bottles of tap water yourself. The service is by no means rude it can be abrupt with a no frills approach. It would also be wise to note that Soho Joe only accepts cash payments, no card machines here. The tables are so close together that the candlelit atmosphere is most definitely counteracted, in fact I did accidentally clash elbows with the girl next to me at one point as we were both cutting into our pizzas. There is quite a variety of seating though so you could always request to be seated somewhere a little more comfortable. I wouldn’t let my comments about the restaurant be taken as a negative though. If you don’t expect fine dining and silver service then the experience is most pleasant.

As far as the Dean Street Pizza Showdown goes, it is hard to compare Soho Joe and Pizza Pilgrims. Both casual dining concepts with back to basics traditionally baked authentic Italian pizzas… you’ll have to wait until the final showdown to see how I rate them and compare them against each other. I might just have to make a couple more visits in the meantime!