Skip to content
Last summer my cousin asked my sister and me if we’d be interested in doing a cookery class with her as she’d seen a Groupon voucher and thought it’d be fun. Along we went to The Smart School of Cookery, not really knowing too much about it as she had booked and organised the whole thing. I’d never done anything like this before so really didn’t know what to expect.
On a beautiful summer’s morning we turned up at their old location in Danbury, Essex and did the Italian and Pasta Master Class with head chef Franck Pontais. It was one of the best afternoons out I’ve ever had. The format at the school works brilliantly, they take small classes of up to ten people all seated around the kitchen bench and the chef gets one or two of you up at a time to take part and make the dishes. So you get to see it being done and get to take part at the same time. Franck was also a brilliant teacher and very entertaining, he made the afternoon really fun for all of us that went.

Back in August we learnt to make pasta from scratch, something I’d never attempted before but now do regularly, a great vegetarian lasagne, mushroom risotto, a delicious tomato sauce with fresh mussels and arancini which, for those of you that have never had them before, are like stuffed risotto balls fried in breadcrumbs. I loved each and every dish and the class made them so accessible and the methods and ingredients used meant you could easily and realistically recreate them at home.
Having enjoyed my first visit so much, imagine how excited I was when I saw it pop up on Groupon again! This time my sister and I bought it for my Mum as a Christmas present, knowing she’d really enjoy it and so off we went this morning for a 3 course master class.
This time we went to their new location, still in Danbury, but which is a bit more spacious and practical than the very cute, but tiny kitchen they had before. Ann Hood, the owner of the school, was our chef today and our mouths started watering as soon as we sat down and caught a glimpse of the menu in store for us.

When everyone had arrived and teas and coffees were poured we began on the starter, and I was one of the first called up to help out… no pressure!
I was tasked with the carpaccio part of the starter, where you don’t cook the salmon, but cure it in lemon and lime juices. Obviously not cooking the fish is something a lot of people will be wary of but Ann was great at explaining what you should and shouldn’t do and the rules about what you can and can’t safely eat. I don’t exactly have expert knife skills (maybe I should sign up for their knife skills class next time) and my first job was to skin the fillet and slice it really finely… scary! Apparently I did ok though and it didn’t look too awful when I was done with it.
Whilst I was busy hacking the salmon to pieces, one of the other pupils in the class was smoking the other salmon fillet under Ann’s expert guidance. I’ve never really thought about doing this before and was amazed at how simple it was. Such a great way of doing something different with your fish, as I don’t know about you, but I always cook my salmon the same way, so it was great to do discover a new method and one that also gave it such a unique flavour, without being too overpowering.
One of the things I really enjoyed about Ann’s teaching is that she’d make suggestions as to how to adapt these dishes and methods, such as suggesting that we could also smoke other things like chicken. This was really great as you get far more out of the class than just learning how to make that one single dish.
We served the salmon with a zingy courgette ribbon salad and crostini. I’ve made variations of this kind of salad before with chilli and citrus juices, but the addition of ginger to this one really made the dish. 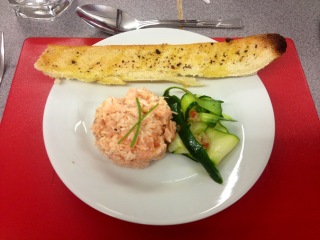 Carpaccio of salmon with home tea smoked salmon
served with chilli and lime infused ribbons of courgette
I think this one had to be my favourite dish of the day, the flavours just all worked so well together and they weren’t really what you were expecting to taste… they were much better. Even the crostini was gorgeous.
Having polished this off we moved onto the main course, which I wasn’t overly excited about because I’m not a great lover of pork, I don’t hate it but I’ll always choose a different option on the menu. I was really pleasantly surprised by this dish though.
As I’d been heavily involved with making the starter, I unfortunately didn’t get the opportunity to get my hands stuck into this one as other pupils were taking their turn but it gave me a chance to catch up on the notes I was taking! The fillet of pork was stuffed with a mixture of sausage meat and pistachio nuts and wrapped in streaky pancetta. Ann showed us step by step how to do this whilst also showing us the method for fondant potatoes (so much easier than when you see it on the telly) and an apple and cider chutney. I totally expected the chutney to taste like any old apple sauce that’s always served up with pork, but this really tasted different, it wasn’t as sickly sweet and just had a really great unexpected flavour. She also showed us how to deglaze the pan we’d used to sear the pork to retain all those meaty juices and create a jus.

Ballotine of pork fillet served with fondant potatoes and an apple and cider chutney
Having been not particularly looking forward to this dish I was really surprised, I absolutely loved it. You’ll have to excuse the messy jus on the plate, I don’t think the swoosh worked out quite so well on this one. The flavours we’d stuffed the pork with and the crispy crunch of the pistachios made the pork really tasty, and each of the accompaniments complimented each other perfectly. I really can’t believe how simple this dish was to make.
Finally we each made our own dessert as the majority of the work with this dish was in the assembling. This was my least favourite of the dishes, which isn’t a criticism, it was fine, but it didn’t excite me or surprise me in the same way the other two did. But then, I’m not really much of a dessert person. It was great fun assembling this and playing with the piping bags though.

Strawberry millefeuille served with a strawberry, basil and reduced balsamic salad
All in all I had another great day learning at The Smart School of Cookery and would thoroughly recommend you go there. If you don’t live locally to my one in Essex, they also have locations in Mayfair and Knightsbridge, Kent and Ascot as well as offering other types of courses and services, including courses abroad. Go and check out the website.
The chefs are really great at explaining how to do things and making it easy for you to take in and really helpful with everyone’s questions. Besides learning some great tricks and exciting dishes, it’s also a really fun day out. I can’t wait for my next course, but I don’t know which one to choose!