To celebrate the 5th anniversary of our first date, The Boyfriend and I recently took a little trip up to Edinburgh for a weekend mini-break. Initially we picked Edinburgh to visit the castle but I was also delighted to discover it has an absolutely fantastic food scene! Since there were so many fantastic parts to our weekend, in a slight break from tradition on this blog I’ve decided not just to talk about the food, but instead share with you all of my favourite places that we visited.

Our first day was a VERY early start with a flight out of Heathrow at 7am but worth it to pack in a full day of adventures. We managed to check in to our hotel and be out and about exploring before 10.30am! No sooner had we arrived in Edinburgh than we hopped on a train and travelled further into Scotland and up to the town of Stirling, just an hour North of Edinburgh. Unfortunately the weather on the day we arrived was pretty miserable but it didn’t stop us from trekking out to find Old Stirling Bridge before lunch. A historic site where William Wallace famously defeated the army of Edward I in the 13th century.

After a long morning and a lot of walking, I was absolutely ravenous and determined to find a good spot for lunch. The Fat Cyclist Café, which serves a great selection of sandwiches as well as some daily specials and soups and a really wide selection of teas, came to my rescue. The perfect place to stop for a bite to eat on a busy day.

The main purpose of our trek up to Stirling was however, surprisingly not the scrumptious tuna sandwich and sweet potato fries at The Fat Cyclist, but to visit Stirling Castle. The foggy weather lent itself amazingly to the Scottish landscape and walking around the castle was actually pretty spectacular in the foggy weather! 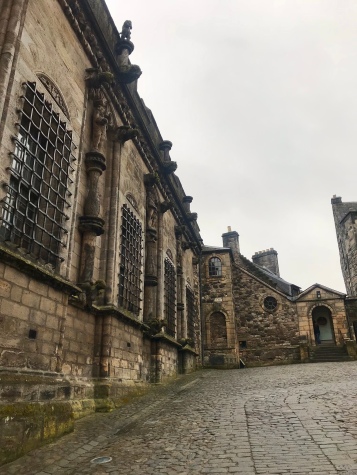 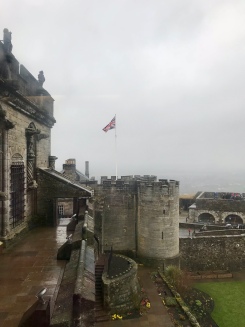 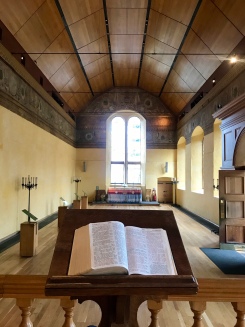 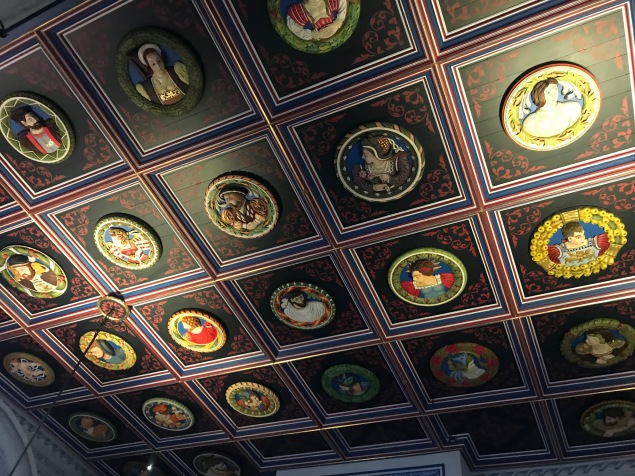 Prior to the union of the Scottish and English throne in 1566 Stirling Castle was principally used as a royal residence. Under the occupation of King James IV from 1488-1513 it underwent a lot of artistic and architectural renovations in his efforts to replicate the renaissance movement of the French and Italian courts. Thanks to James, for the art buffs among you, there’s a lot to see, including the infamous Stirling Heads, an epic collection of sculptural portraits of Kings, Queens, courtiers and biblical figures that adorn the ceilings of the Royal Palace.

The castle also houses The Argyll & Sutherland Highlanders’ Regimental Museum which is definitely worth a visit. This museum is run entirely on donations and also raises money for the Thin Red Line Appeal.

Perhaps it was the foggy moody weather or the fact that it was quiet on the day we visited but there is something about Stirling Castle that I found quite atmospheric. It’s an ominous figure perched on a hill top and it’s almost as if the castle itself has a presence and a personality, it’s a peaceful and awe-inspiring place.

One of my favourite foodie discoveries on our visit was The White Horse Oyster Bar and Restaurant. A little further down The Royal Mile away from the hustle and bustle of the main tourist attractions, we discovered The White Horse on our walk from our hotel up to Edinburgh Castle. Scotland is famed for it’s excellent seafood so I couldn’t wait to get stuck in. I always think of seafood restaurants as quite fancy and a little bit stuffy but this one is fun and quirky and definitely has a really cool vibe from the branding and interiors to the atmosphere and staff.

Oysters aren’t really my thing but The Boyfriend had never tried them before and wanted to give it a go. Neither of us have a clue what we’re doing when it comes to ordering oysters but the menu at The White Horse breaks it down quite easily for you and our waitress was absolutely amazing. She described the flavour of the different types, suggested which ones are better for beginners and even what to taste them with and how to eat them all whilst somehow managing not to make us feel like total plebs! If you want to give oysters a go for the first time then do it at The White Horse.

I was desperate to try some Scottish salmon while we were in Edinburgh and so chose the Scotch Bonnet cured salmon to start. Despite the description this really isn’t a spicy dish so don’t let it put you off. Served simply with avocado and tomatoes this was a light and refreshing dish that really showed off the salmon at it’s simplest and best. 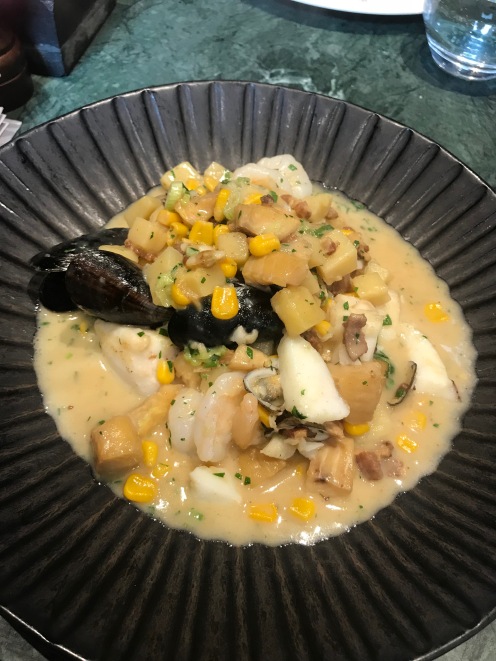 I also ordered the seafood chowder from the lunchtime specials menu as it’s one of my favourite dishes, plus what better way to try some Scottish seafood than eat a pile of it all in one bowl?! Am I right? Having spent a bit of time in Northern California, I’ve tried my fair share of seafood chowders, but this one really wiped the floor with them. Packing in a surprising amount of cod, haddock, clams, prawns and a few big juicy mussels this dish wasn’t shy on the fish as can sometimes be the case. This is a dish I regularly try to replicate at home but I don’t think I’ll be able to beat The White Horse‘s version.

Another day, another castle! Edinburgh Castle really is the main attraction of the city. An imposing figure, perched on Castle Rock it overlooks the whole city and one of the best reasons to visit is simply for the views!

But first of course, we had to stop for breakfast. Just a few doors down from our hotel we stumbled across Henderson’s, a great little vegetarian and vegan café serving up fresh breakfasts and baked goods. This was right up my street as a traditional fry-up makes me feel sleepy, not ideal for an action-packed day of exploring. A good helping of avocado on toast and a pot of tea later and I was ready to continue our sight-seeing adventures.

Like Stirling Castle, Edinburgh Castle also has a chequered history, continually changing hands between The Scots and The English, although it has much more of a military history being principally used as a barracks and a prison as opposed to a royal residence. The prisons are definitely worth a look with some really fascinating artefacts and a lot of interesting information about the prisoners housed there. 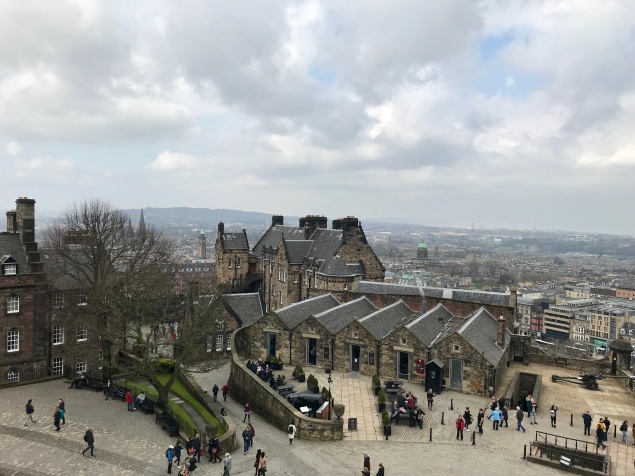 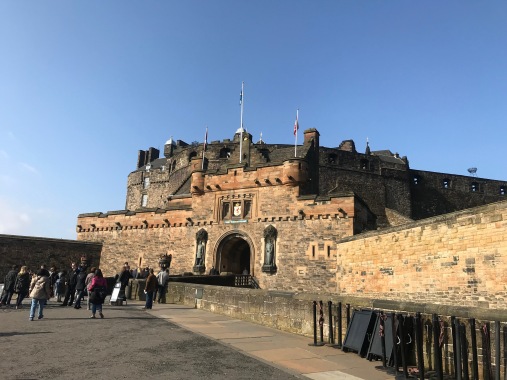 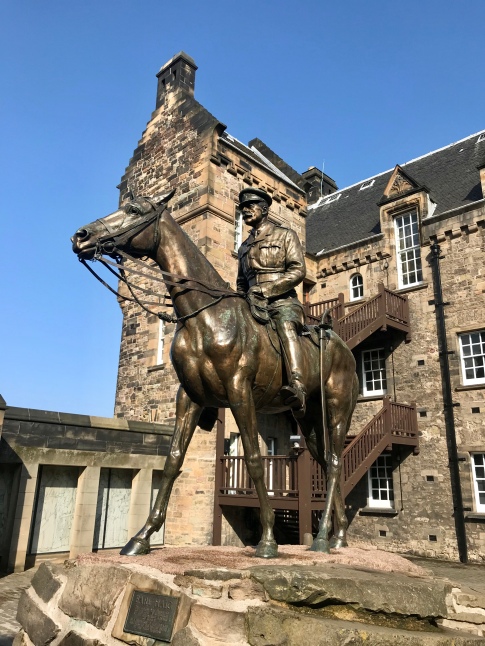 Recruitment posters on display in The National War Museum

The National War Museum was top on the list of The Boyfriend’s places to visit with his military history and from my point of view was captivating enough to capture the interest of those not so fussed about the military side of things. The best bit about it for me was the display of recruitment posters. I’ve always loved historical posters as they are a fascinating look into the history of design and advertising.

Angels with Bagpipes, The Royal Mile

As my favourite foodie discovery of the trip I have given Angels with Bagpipes the honour of it’s own post but I couldn’t go without mentioning it in this little round up. If you’ve got an occasion to celebrate or you simply want to enjoy a really nice meal on your trip to Edinburgh, put this restaurant at the top of your list. You can read all about it here, but in the meantime here are some yummy pictures to salivate over… 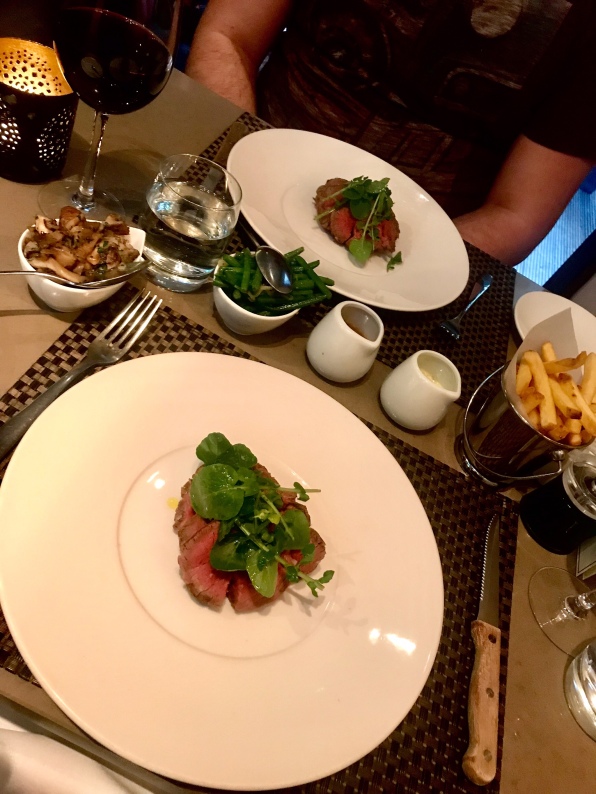 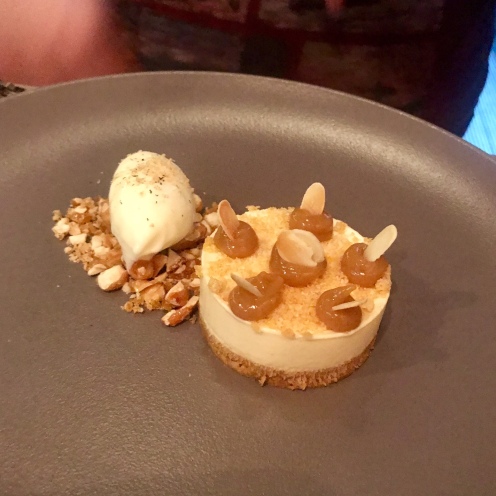 I didn’t get to spend as much time at The National Museum of Scotland as I’d have liked as we popped in to see The Wildlife Photographer of the Year exhibition to pass the last few hours before we had to head back to the airport. Unfortunately the exhibition doesn’t allow photography so there’s not much photographic evidence of this part of our trip. The exhibition has now finished in Edinburgh but you can still catch it in London’s Natural History Museum.

I plan on doing another trip to Edinburgh and putting this museum at the top of my list as there’s a really eclectic selection of displays on here that I’d love to spend a couple of hours perusing!

Our last supper in this beautiful city was lunch at Howie’s. A small Scottish chain of restaurants we were enticed in by the bargain lunch deal, 3 courses for £14.95! The price may have been cheap but this was not at all reflected in the food! 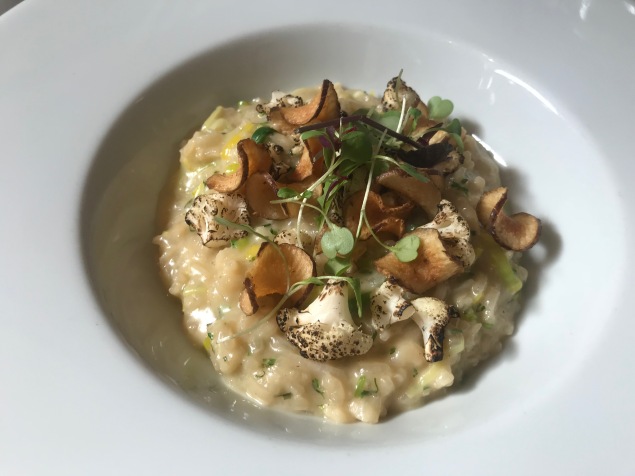 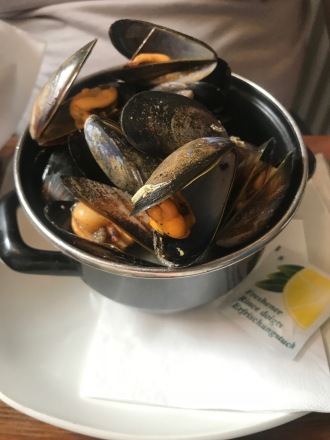 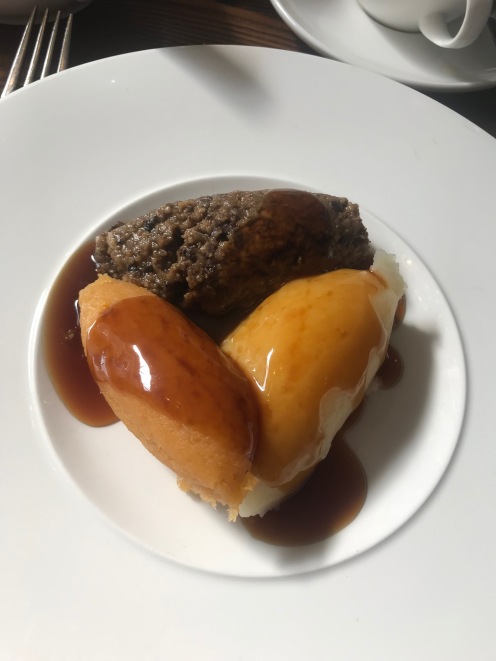 The highlight of Howie’s for me was that on our last meal I finally got to have haggis, neeps and tatties! I had tried it before but I couldn’t visit Scotland without having some. It’s a delicious little taste sensation, perfect for a starter and if you’ve not tried it before give it a go, the flavour sort of reminds me of a Cornish pasty.

I chose the vegetarian option for my main course at Howie’s as it was packed full of veggies that I love, I’m a real sucker for an artichoke! It was delicious and a refreshing and modern take on the classic ‘let’s stick a risotto on the menu for the veggie option’.

To summarise my trip to Edinburgh I’d have to say that I fell in love with the city far more than I was expecting to. It really is beautiful and I’ve never been to a place like it. The city has it’s own unique personality and a sense of adventure that there’s something new to discover down every little winding staircase and alleyway.