Skip to content
I was really excited about cooking this dish, mainly because I LOVE pasta with a passion. I have a little collection of interesting pastas including some rainbow striped pappardelle and a selection of multicoloured farfalle. I also picked up some black squid ink spaghetti at a food market a little while back and have been dying to give it a go. 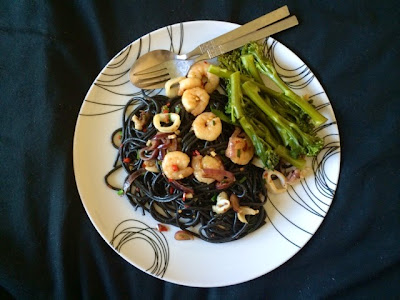 The opportunity presented itself last weekend when I asked The Boyfriend what he wanted me to cook. He challenged me to do something a bit different and maybe see if I can get him to like something new or that he’s previously been unsure about. Being an avid hater of mushrooms (I don’t understand this as I love them) I began planning a creamy mushroom risotto to get him to change his mind. I was, however, promptly banned from feeding him mushrooms. Such a shame. He did come up with a great new suggestion though, and proposed that I did something with squid. Having tried it once, been unsure and a bit squeamish about the tentacles, he thought it might be something he would actually like if he gave it another go… and I didn’t give him any of the tentacles.
I threw some prawns into the mix just in case the challenge went wrong and The Boyfriend decided he ultimately didn’t like squid. This way he’d still have something substantial to eat if all the squid ended up on my plate. Thankfully though it was a massive success! I really don’t think you can go wrong with the combination of freshly cooked seafood, chilli and well cooked pasta. I was looking to create something really spicy with this dish so if you’d prefer a milder flavour I would leave out the green chilli and go easy on the chilli flakes. I also served up some steamed broccoli on the side, purely for the sake of nutrition and not wanting to give us a meal with no fresh veg element. Any sort of steamed green veg would go nicely on the side of this, or perhaps even some fresh spinach mixed in at the last minute.
One of my favourite things about this dish is just how good it looks. The black squid ink spaghetti just adds a really great aesthetic quality, pasta never looked so sexy! I think this is a great date night dish if you’re looking to impress.
Ingredients
(serves 2)
150-200g black squid ink spaghetti
1/2 red onion, sliced
1 green chilli, deseeded and finely chopped
1 red chilli, deseeded and finely chopped
2 cloves garlic, finely chopped
1 tsp dried chilli flakes
200g uncooked king prawns
2 small squid, gutted and cleaned, sliced into rings & tentacle chunks
small bunch chives, finely chopped
oil for frying
salt and pepper
Method
1. Place the spaghetti in a large pan of boiling, salted water and cook according to packet instructions (roughly 10-12 mins) until al dente. 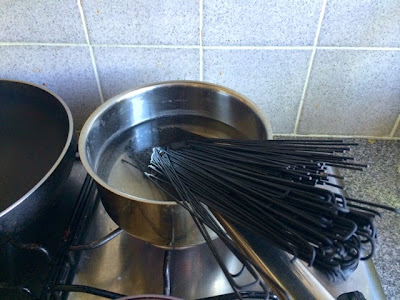 2. Meanwhile, heat a little oil in a pan and gently fry the onions and both colour chillies. 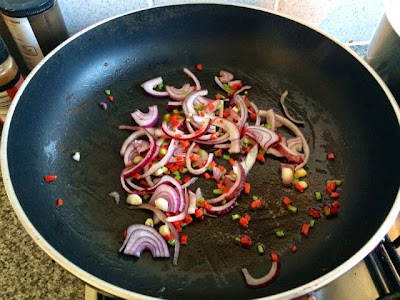 3. When the onions have begun to soften, add the garlic. 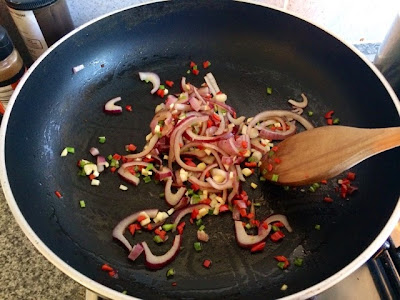 4. Sprinkle in the dried chilli flakes and continue to fry, gently stirring for a further minute. 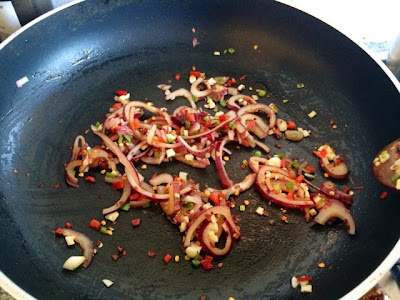 5. Add the prawns and cover in the chilli mixture. 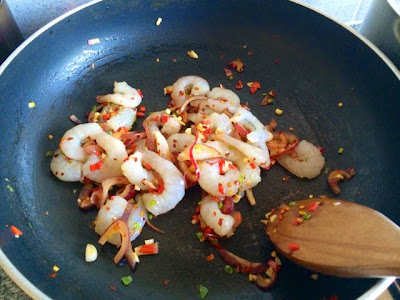 6. When the prawns have begun to turn pink, throw in the squid and cook for a further minute or two, the tentacles and rings should curl up at the edges. 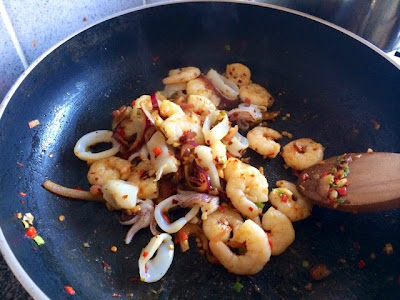 7. Drain the spaghetti, reserving a little of the cooking water. 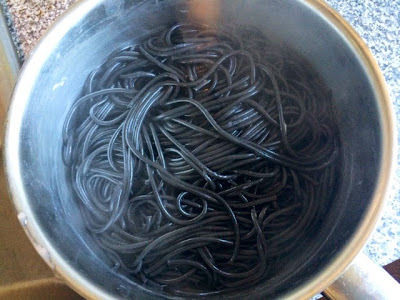 8. Throw the chives into the seafood and chilli mix. 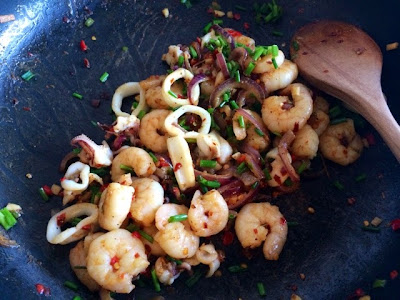 9. Tip the drained pasta and the reserved water into the seafood mix and toss through ensuring the mixture spreads evenly through the pasta. 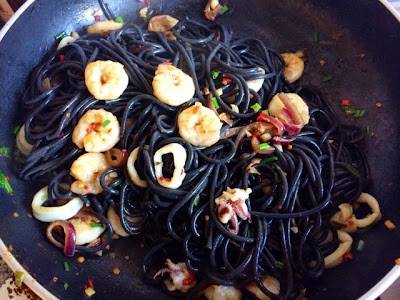 10. Divide among two plates and enjoy. 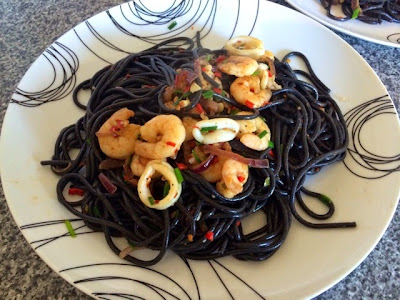