Skip to content
Regular readers will know that I usually do London restaurant reviews as I work in central London and am often out and about in town on weekday evenings eating all the yummy food I can get my hands on and trying new restaurants (sharing food or getting together over dinner is, in my opinion, the best way to socialise). However, there’s also an abundance of good restaurants near where I live in Essex. I suppose I’ve refrained from featuring them on the blog before as I don’t eat out in Essex as often as I do in London so they’ll be a bit few and far between, but I feel they are very worthy of a mention and so I’ll begin with The Dog & Gun which is located between Boreham and Great Leighs, about 4 miles outside of Chelmsford.
The Dog & Gun is an old coaching inn which was given a total overhaul a few years back and is now a nice contemporary restaurant which boasts an interesting and varied menu and some seriously tasty food in a pretty country setting. I’ve eaten here a few times and every time the menu is different. I find this quite encouraging as they’re obviously paying attention to customer preferences and keeping in mind seasonal and local produce and keeping things fresh. I am terrible for looking up restaurant menus and picking what I’m going to have days before I even visit but this is thankfully impossible at The Dog & Gun as they only have a sample menu online and I’ve always found new things on the menu every time I’ve been. 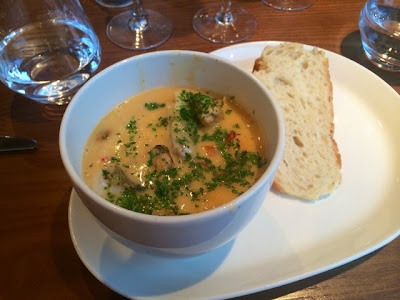 Last week I visited with my family on a special occasion as it was my Mum’s birthday so naturally we kicked things off with a bottle of prosecco. I began with the Chilli Fish Chowder, which is available as both a starter and a main course. This was by far my favourite dish of the evening, hidden in that beautifully bright orange sauce were mussels, prawns, crayfish and chunks of salmon and cod. every chunk was meaty and well cooked, nothing rubbery to be found. The sauce was creamy and sweet, I was expecting a bit more heat as the description on the menu did describe it as a chilli fish chowder however it really wasn’t all that spicy. It was lovely as it was but I could have taken a bit more of a chilli kick. I almost wish I’d chosen this as my main dish just so I could munch my way through a bigger bowl of the lovely stuff.
Dinner was a slow roast lamb shank with mashed potato, braised red cabbage and a jus. The lamb was cooked absolutely beautifully, falling of the bone with a lovely rich flavour. Everything on the plate went together well. Overall a well cooked traditional British dish. 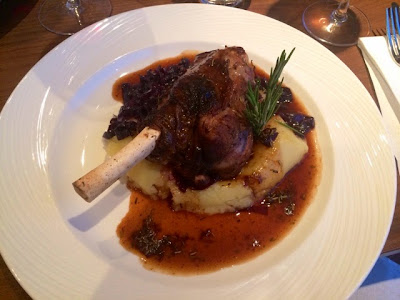 No one else was really in much of a dessert mood but seeing the chocolate tart with peanut butter ice cream and hazelnut brittle on the menu I simply couldn’t resist. The hazelnut brittle was lovely and crunchy and actually edible unlike the sometimes rock solid glassy kinds you can get which are impossible to bite into. The chocolate tart wasn’t too rich or overly sweet and the peanut butter with it just went perfectly. This was a really well thought out and executed dessert. 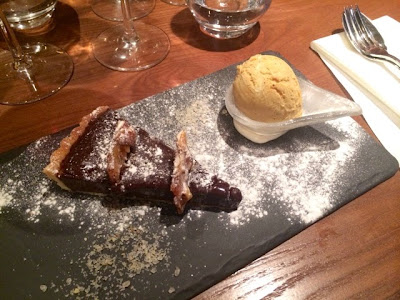 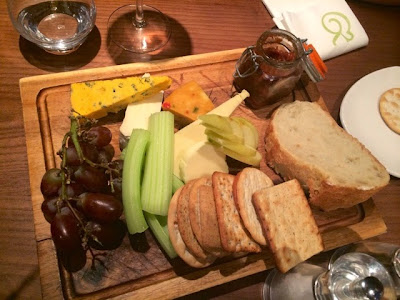 My parents shared a pretty epic cheeseboard, which I felt deserved a mention as I was really impressed with the generosity of it. I love a cheeseboard but often you only get a mouthful or two of each cheese, this one however had 5 different cheeses and a generous chunk of each at that, as well as a good selection of accompaniments.

So far every meal I’ve had at The Dog & Gun has been really enjoyable and everyone I’ve been there with has equally particularly enjoyed their dinner. I don’t think I’d go here for a casual dinner, it’s a bit too formal/expensive for that. It makes a great date night venue though or is perfect for an occasion. If you live in the Chelmsford area I’d highly recommend it for a really nice birthday/anniversary dinner, very much worth the drive out into the countryside.