Skip to content
On a cold and windy Friday evening, just before December, the Christmas season was approaching and I could be found rushing down to Tobacco Dock for an evening of festive foodie delights. I’ve not been to Taste of Christmas before, although I have been to Tobacco Dock for Feast before, so I was excited to revisit one of my favourite venues. I wasn’t sure quite what to expect from Taste as it’s promoted as a restaurant festival which hasn’t really been the focus of any food events I’ve been to before.
I was a little disorientated when I first walked into the event as the venue was totally unrecognisable from my last visit. Being a much bigger show, the event was compartmentalised and sectioned off a lot more, making it difficult to work out exactly where you are. Event guides were being handed out so I guess if I’d wanted to find a specific stall this would have come in handy but I prefer to wander and see what I come across.
My first impressions: despite the abundance of Christmas trees and fake icicles, it wasn’t quite as festive as I’d expected. Having been to the Ideal Christmas Home show less than a week before, I was expecting fake snow, Christmas choirs and mulled wine stalls at every turn. After a little wander around, we came across our first restaurant area and I stopped by Acciuga for a little fritto misto. This was delicious, a mixture of squid and small fried fish, each piece was perfectly cooked and seasoned and served with a wedge of lemon. 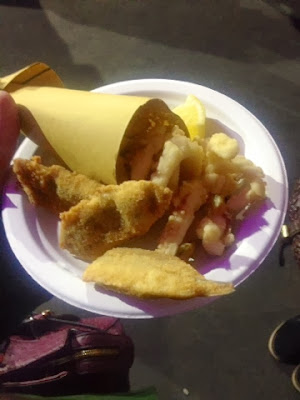 Another highlight was the Truscott Arms where I tried a gnocchi dish with rocket, parmesan and a porcini sauce. Having only recently tried gnocchi out at home and not quite got to grips with it, it was really nice to have a taste of it done properly and the sauce was absolutely stunning. 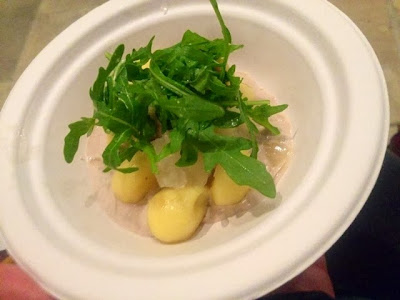 The majority of the event was taken up by stalls selling artisan produce and Christmas gifts. With a mulled wine here and there along the way I managed to pick up one or two prezzies (which unfortunately cannot be revealed in case the recipients are reading). I also bought myself a little gift of squid ink spaghetti. I’m obsessed with pasta and have always been drawn to all the weird and wonderful shapes and multi coloured/flavoured varieties available. As soon as I got home I got out my Carluccio book to see what I could do with my squid ink spaghetti, so watch this space for that one.
Other treats along the way included a spinach pastry from Little Jack Horner’s. This was incredible and I also tried a bite of their sausage roll which honestly was one of the best I’ve ever tasted. We’d wolfed these down before I even thought to take a picture, apologies.
There was one thing I really didn’t like about Taste and that was their crowns fake currency system. You can only pay in crowns at the restaurants and the stalls accepted a mixture of both crowns and cash, some not taking crowns at all. To get hold of crowns you had to go and purchase a booklet of the vouchers, which were only sold in packs of ten. Not helpful if you want a fiver’s worth. Also a lot of the dishes were priced at four crowns or six to eight, often leaving you with the odd one or two leftover. I managed to get rid of all mine spending them on some of the stalls that did accept them. However, as the crowns are non-refundable I’d be willing to bet there were more than a few people going home with crowns left in their pockets that they’d purchased but not quite managed to spend. As all of the stalls still accept cash anyway, the reason for this system can’t be to create a cash-free event, so it all just seemed unnecessary and a bit of an annoying process.
Getting to try some really nice fine dining at Taste of Christmas was a really great treat and made a change from the usual street food theme at these type of events. Overall it did seem like there wasn’t really as much food to actually buy to eat. The focus was definitely more on gifts with plenty of specialist cheese and wine stalls as well as chocolates, preserves and the like. 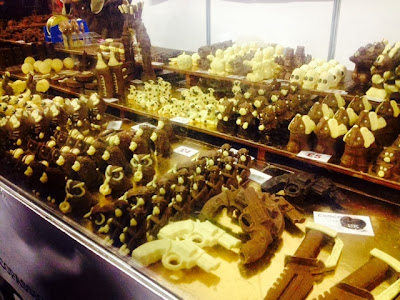 There were a few cookery classes and demonstrations going on and I got to briefly spot Gizzi Erskine in one, but being there for just a few hours on a Friday evening I didn’t really have much of a chance to take advantage of this sort of thing. This would probably be more practical to fit in on a day trip at the weekend.

My sister got us complimentary tickets to this event, however full ticket price is £23.95 (plus admin fee) online or £26 on the door. I think I’d be a little disappointed if I’d paid that much for it, as all that gets you is entry, no food or drink included. However, there are always a lot of deals around for these things and I’ve seen good deals for it on discount sites like Groupon and Living Social, also you get a lot of offers through signing up to their newsletter. Definitely investigate these options if you’re planning on paying a visit as it makes the whole experience much better value.

Taste of Christmas is on at Tobacco Dock until Sunday.