Skip to content
Another weekend, another food festival… It’s a hard life isn’t it?! This weekend was the turn of Foodies Festival with a picnic theme and a ‘pop-up beach’ (average sized sand pit) in Battersea Park.
With a group of eight, a 3 year old and a 6 year old in tow and intermittent rain showers with only one brolly and one rain coat between my sister and I, the day was slightly more chaotic than planned but in true British style we battled on through. Can’t beat lounging on a couple of deck chairs with a burger and a bottle of prosecco whilst its starting to drizzle! 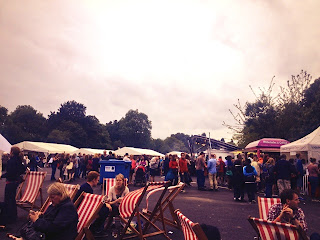 The first offering of the day was a plate of chilli squid with chipotle mayonnaise. Served up tentacles and all, this was absolutely delicious. The squid was tender and perfect, with a crispy crumb coating and not a hint of rubberiness. The spicy mayo made a really pleasant change from the usual aioli/tartare offering. 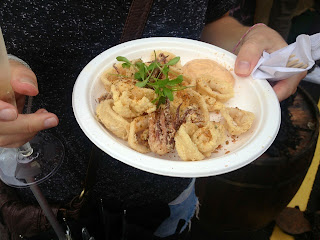 We stopped by the demo tent for a little while to see Ed Baines knocking up a tasty potato dauphinoise, but unfortunately were too hungry to stick around and see the end result. 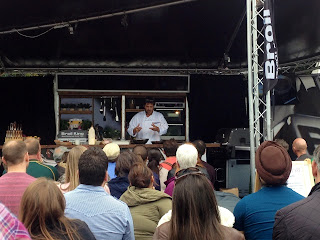 I had decided that I was going to avoid the burgers this time round. As much as they’re always delicious, I always have a burger at these things and I wanted to go for something a little different… But then I saw this exciting offering of exotic meats and thought it’d be rude not to… I opted for the wildebeest burger, which was very nice, very juicy, pretty much everything you could ask for from a good burger… But if you’d served it up to me as a beef burger I wouldn’t have known the difference. I’d have been disappointed if they’d been charging more for this than your average beef burger but at £5, which is pretty much the same as everywhere else, for a nice juicy burger I can’t complain. 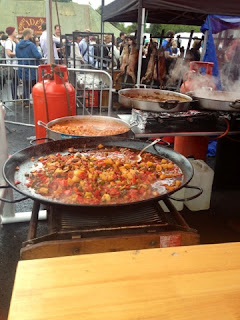 The final savoury offering of the day was a scrumptious lamb tagine. 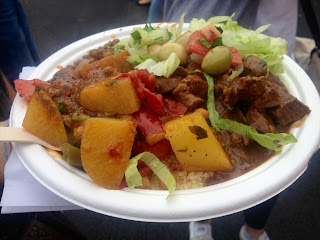 It’s hard to resist the aroma wafting temptingly from these kind of stalls and I was really glad I tried this. With a seriously generous portion I couldn’t finish the whole lot, but the lamb just fell apart in the mouth and the combination of spices used made it so so morish. It was seriously tasty and my cousin and I ended up going back to the stall to find out what spices they’d used. 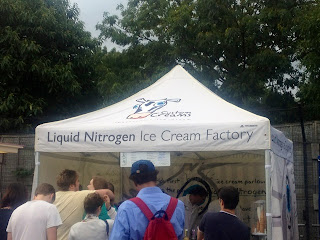 It was great to see Custom Creams at Foodies Festival again because I love their tasty flavours, however it was far too cold for ice cream so I opted for a nice hot crêpe instead. 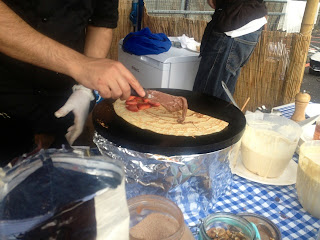 Strawberries and Nutella… Yum! With full bellies, tired feet and slightly damp jackets, we headed home for the day but despite the elements, this was yet another fantastic food festival and I actually quite enjoyed the atmosphere created by the not so glorious weather. 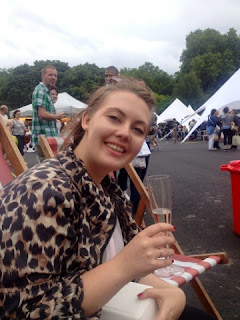